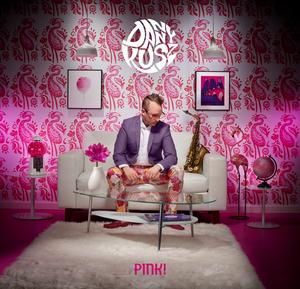 Minneapolis based saxophonist Danny Kusz, The man in Pink, just released his new album PINK! This long-anticipated album will release on Innervision Records in the coming weeks. This album features some legendary musicians such as Jellybean Johnson.

Danny Kusz is influenced by Prince, The Minneapolis sound and David Sanborn, and there for his sound is instantly recognizable. Danny launched his second solo album ‘SEXY.FUNK’ in 2014. Two years later his release ‘Eruption’ earned him 3 radio singles and a top10 hit song. On this album, he collaborated with jazz legends like ‘Jeff Lorber’. He signed in 2016 with Innervision Records and released his first single off the label ‘Can’t stop the groove’. During these years Danny shared the stage with biggest names in Jazz: Stokley, Jellybean Johnson, Joey DeFrancesco, Althea Renee, Adam Hawley, Eric Leeds, Will Donato, N’Dambi, Anthony David, Phil Denny, DW3, Selina Albright, Nils, Lindsey Webster and Bobby Lyle. Danny has also opened for Morris Day & The Time, Stanley Jordan, Harvey Mason.

This album is a mixture of Pop, Jazz Funk and Funk with that typical Minneapolis sound. You will hear the influences of Prince. The album starts with the funky track ‘Cotton Candy’. Great Alto Sax on top the synth sounds. A lot of the tracks sounds like the eighties, with the super bass, synth lines. These are very present on the second track ‘Pink & Paisley’, which is a very funky tune. Also, sounding eighties is track #3 ‘Bubblegum Love’, Danny probably used an Oberheim DMX drum computer. Nice guitar riffs. Love this tune. The slow tempo tune ‘Glitter’ feature ‘Jellybean Johnson’ and sounds fine. ‘Arrival Of The Lotus’ has a new funk sound with superb synth sounds. His first single on Innervision ‘Can’t Stop The Groove’ which was a top 10 GrooveJazz chart single is track #6 on this PINK! Album. If I had to choose a tune from this album I definitely picked this track, very groovy with fantastic guitar riffs, and percussion. ‘G504’ is another nasty Funk track, which could be done by ‘The Time’. The last tune on this album ‘Funky Flamingo’ featuring the MPLS horns is Funky, Jazzy. Of course, Danny is blowing his lungs out on each track. What a fantastic Sax player.

In short: If you like the Minneapolis sound, Prince, David Sanborn and Danny Kusz, then you need to purchase this album. I think you’ll never regret it.